After Biden Tried to Shake Hands With Nobody on an Empty Stage, Watch Hannity Embarrass Him 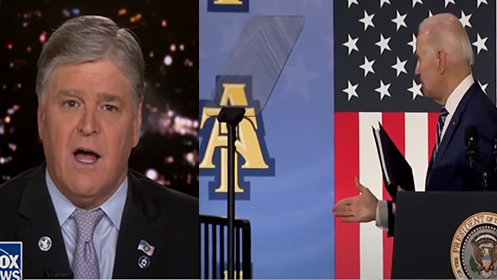 Sean Hannity BLASTED President Biden today after his speech in which he seemingly blamed all of America’s problems on everyone but himself. But that wasn’t even the most pathetic part of the speech, as Hannity points out in the video below.

Right after he was done, the President turned around with his hand extended to shake hands, but there was no one else on stage. Then he seemingly walked around like he didn’t know where to go. (Watch Below)

“Anybody surprised Biden cannot even do simple fundamental, basic tasks. He turns around and there’s nobody there to shake his hand, and he keeps his hand out there. Are you kidding me?”

Watch for yourself and share this so more people can see it. Why does he reach his hand out and keep it there? So strange..

Hannity continued by blasting Biden’s refusal to take responsibility for anything. Blaming Putin for all America’s problems.

All of that is a complete and utter lie. We’re nearly 15 months into Biden’s presidency [and] everything is going wrong. And I mean, everything. I can’t name a single thing that’s going right.

Inflation [is] at a 40-year high and getting higher. Food costs, the cost of every item you buy in every store is now going through the roof. Energy costs – well, you never paid more in history for a gallon of gasoline and the cost to heat and cool your home is through the roof. On top of that, rents have now increased by over 17%. Interest rates – they are rising fast. Real wages are down by 3% and Biden’s Green New Deal economy is now a living nightmare for you, the American people.

[But] that is a lie, and thankfully Americans can see through [it].

Do you agree with Hannity here?

Previous Post
After Fetterman Stumbled His Way Through Debate With Oz, Watch Tucker Embarass Him on Live TV