After Fetterman Stumbled His Way Through Debate With Oz, Watch Tucker Embarass Him on Live TV 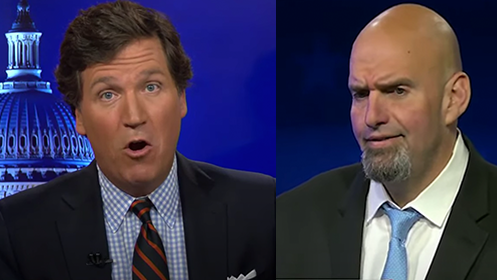 In last night’s Pennsylvania Senatorial debate, John Fetterman had arguably the worst performance of any candidate in history. Everyone who watched was cringing, and by the end you were glad it was over.

It wasn’t just one or two questions either. John Fetterman did not show any ability to comprehend or respond to repeated questions.

Tucker was going off the air as many of these clips began circulating so he called an audible during his live show to address it.

But that wasn’t even the most shocking clip.

Just watch a couple of these yourself.. and ask yourself: is this man is capable of serving in the U.S. Senate?

Watch his answer on Fracking:

And when he was asked about why he won’t release his medical records:

You feel bad for the guy, and his supporters, but the Democrats did this to themselves. Given Fetterman’s current (hopefully improving) condition, they could’ve tried to field a different candidate and ask him to step aside for his own health.. but they didn’t.

Here are some of the highlights from Fetterman’s stumbling answers throughout the night:

Next Post
After Biden Tried to Shake Hands With Nobody on an Empty Stage, Watch Hannity Embarrass Him